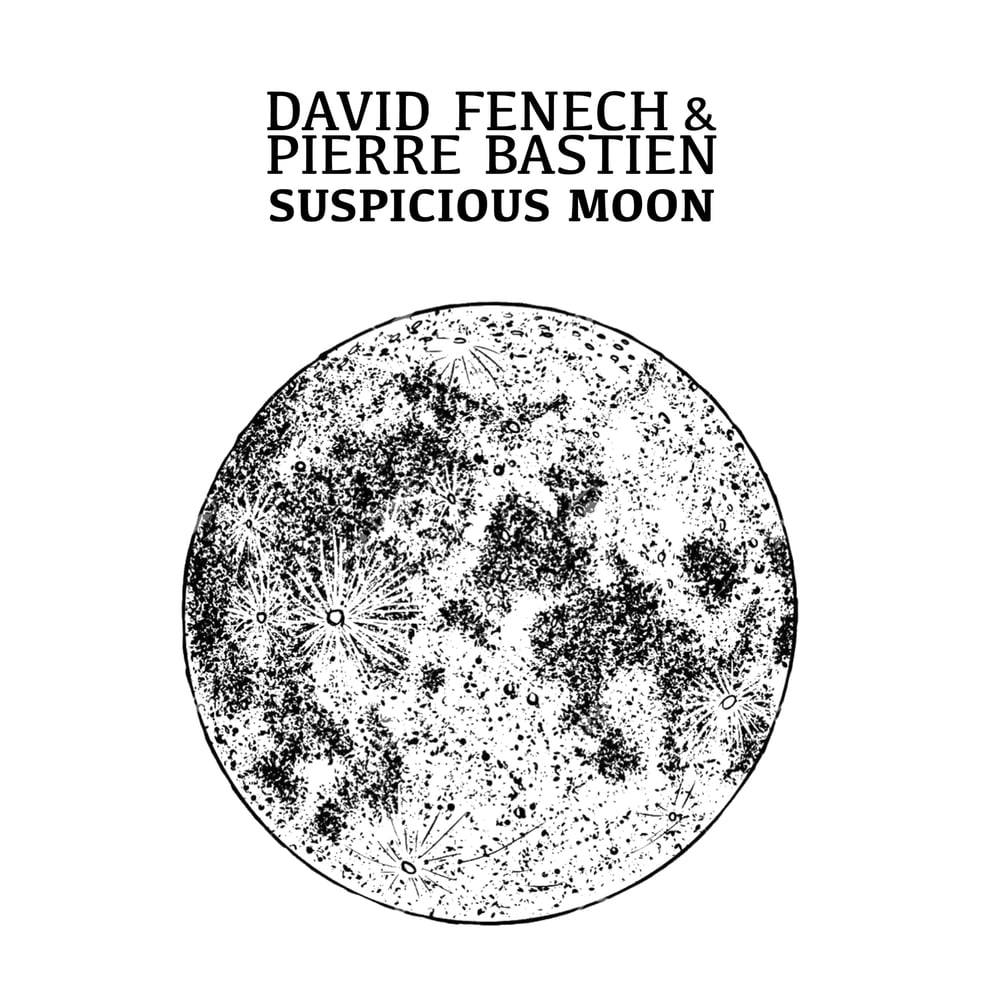 The idea of "Suspicious Moon" started at a party around the topic of blue color. David Fenech had chosen to play "Blue Moon" and Pierre Bastien asked to join in. It was a very enjoyable party and then they recorded the song and decided to plan an album exclusively based on covers of the King. Not that we were absolute fans of Elvis... but as a starting point to go somewhere else. And this is what we reached: in many aspects a premiere for the two musicians. Pierre focuses on (prepared) trumpet for the very first time, while David is heard extensively as a vocalist and is more than ever responsible for all arrangements and textures.

Playing other people’s material is also a premiere for both of them. 11 tracks around very well known standards. Like familiar places that are changed when seen in a different light. Please enjoy.

"Our choice of the Elvis Presley song book for this record may seem strange to many. It seems strange to me as well. Not that I dislike the original music, but before our sessions it had never been a direct source of inspiration. Paradoxically, this distance gave me freedom and flowing ideas. I hear similar qualities in David’s parts too. We hope that our relaxed attitude and its positive outcome will be reflected in this album" - Pierre Bastien

“The strange thing about these recordings is that the creative process was so fluid and natural… that it seems that through playing other people's music, we almost reveal something of ourselves. As if these tracks were our creation, as if they were our own children!” - David Fenech

Pierre Bastien (born in 1953) is a French musician who builds his own machineries, at the cross between music and visual art, that blends live trumpet sounds with screen projections of on-site, mechanical sound sculptures in a very poetic way. His work is described as “a timeless sounding orchestra, both futuristic and slightly dada, conjuring ancient traditions in its surprisingly sensuous music.”. Around 1986 he started participating in Pascal Comelade's Bel Canto Orquesta. At the same time he created - and literally built - his own orchestra called Mecanium : an ensemble of musical automatons constructed from meccano parts and activated by electro-motors, that are playing on acoustic instruments from all over the world. Collaborating in the past with video artist Pierrick Sorin, fashion designer Issey Miyake, singer and composer Robert Wyatt and Aphex Twin (who released three of his albums on his label Rephlex) to name a few, he is one of the most influential experimental musicians working in the field. In 1986 he formed his own self made one man orchestra, Mecanium and made over 20 records over the years.
“a mad musical scientist with a celebrity following” (The Guardian ).
www.pierrebastien.com

David Fenech (born in 1969) is a French musician living in Paris. He plays a large variety of instruments and is a skilled guitar player with his own technique. His main instrument is the microphone and his music features whatever he puts under it. His baroque style has been described as ‘a kind of punk musique concrète’. He has played and recorded with musicians such as Jac Berrocal, Felix Kubin, Jad Fair, Tom Cora, Rhys Chatham, Jah Wobble, Ergo Phizmiz, Nurse With Wound and many others. His third solo album will be released this year 2022. His recordings have been published on inPolysons, Sub Rosa, Blackest Ever Black, Wergo, Gagarin Records.
"One of my all time favorites" (Felix Kubin)
"Truly unpredictable, you never know where any given tune is heading, or which stylistic outfit he is going to whip out next from his magic trunk of disguises. He makes it look easy, but you can bet there’s 500 kilograms of sheer talent and hard work behind his every move. Recommended! " (Ed Pinsent - The Sound Projector)
davidfenech.fr