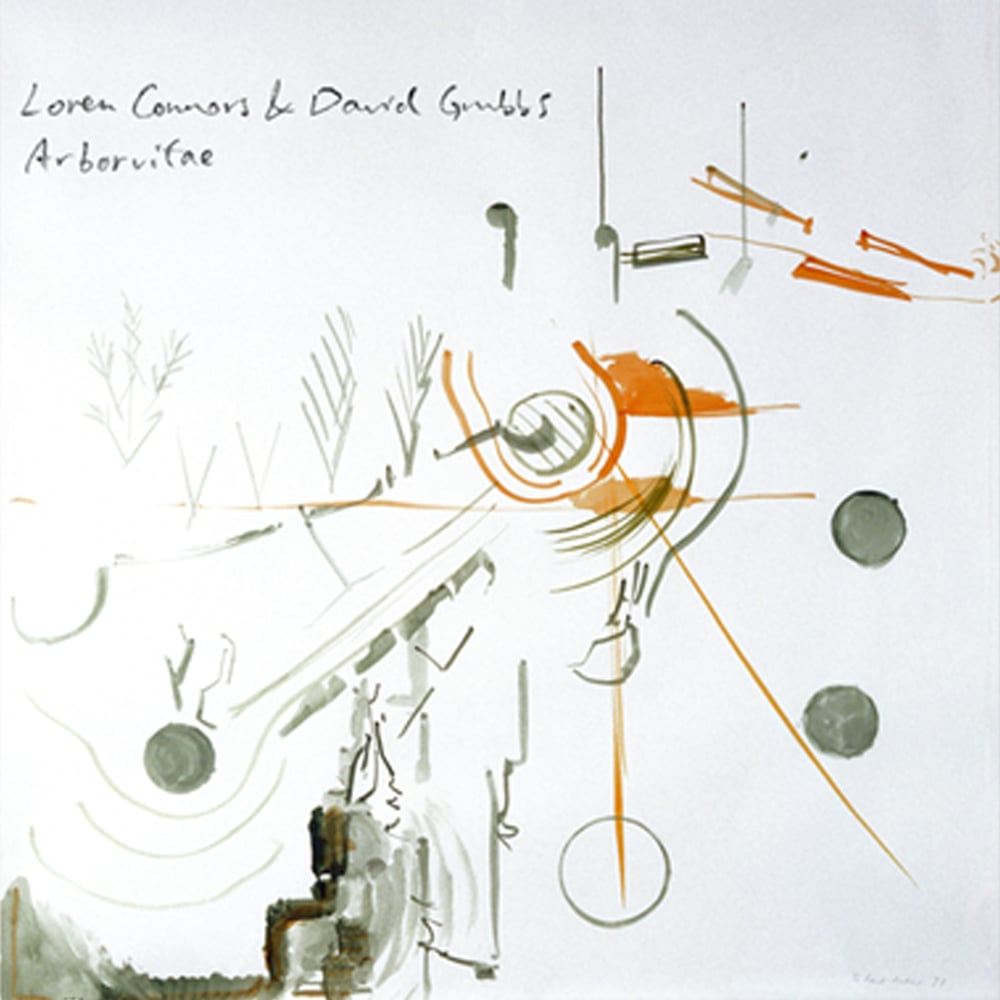 This is the first LP release on Loren Connors’ and David Grubbs’ Arborvitae, originally released on CD by the Swedish label Häpna in 2003.

Loren Connors and David Grubbs first performed as a duo on May 30, 2003 at the Green-Wood Cemetery Chapel in Brooklyn, N.Y. Green-Wood Cemetery is one of Brooklyn’s landmarks—it’s the highest natural point in the borough, and an unexpected expanse of tranquility in the midst of the city. The stone interior of the chapel makes the quietest of sounds audible, and Loren and David played a remarkably quiet yet extraordinarily varied hour of improvised music. Energized, they repaired to the studio to record Arborvitae.

It certainly could have happened earlier. David first heard Loren’s In Pittsburgh LP (St. Joan) in 1990, and felt it a revelation. Loren’s example of creating silences, of singing—with the guitar—in silences, was crucial to David’s shift from the rock trio Bastro to the often percussionless Gastr del Sol. David and Jim O’Rourke reissued In Pittsburgh several years later on their Dexter’s Cigar label, and Loren and Gastr del Sol performed a number of shows on the same bill, including the 1996 Table of the Elements Yttritum festival in Chicago.

Arborvitae opens and closes with the pairing of David on piano and Loren on an electric guitar played so quietly that at times his pedal-stomping is wondrously distinct. “Blossom Time” and the title track positively float, with Loren alternating between soaring single-note lines and playing the rough, barnacled anchor to David’s relentless tide. David’s approach to the piano recalls his playing on Palace’s Arise Therefore and his own Banana Cabbage, Potato Lettuce, Onion Orange. Loren hypnotizes throughout. This is one of the rare instances up to this point in his career that he had recorded in a commercial studio, and his playing, time and again, rewards such a detailed recording. “The Ghost of Exquisite” and “Hemlock Path” are two slow-motion lockings of guitar horns. “The Highest Point in Brooklyn” isn’t the place to be in an electrical storm—but it rolled in all of a sudden and there we were, uncovered and open to the elements...

“This studio meeting between avant garde guitarist Loren (Mazzacane) Connors and former Jim O´Rourke accomplice David Grubbs is a heaven blessed match. The music they make together is equally divinely inspired, although more small concert hall than full-on gospel choir. Recorded in June 2003 in Brooklyn, New York, Connors´s mournful, atmospherically drenched guitar rubs amiably against the side of Grubbs´s studied piano exercises in the opening Blossom Time.” At times, the drawn out process makes it feel as though a game of musical chess is in progress, with Connors and Grubbs carefully pondering each move in order to avoid creative checkmate. Grubbs also adds electric guitar to the session which, unlike Connors´s brooding spiderweb of sound harks back to the well spaced, sturdy chord changes that dominated the music of John Fahey during his final years. On “The Ghost of Exquisite,” a form of rock guitar can be heard echoing in the freezing mix, but for the most part Arborvitae slowly leaks into the higher church of contemporary classical in the lofty way it presents itself. Beautifully performed and recorded, this addictive music demands a rematch in the not too distant future.”
Edwin Pouncey, The Wire